The Castle On The Hill 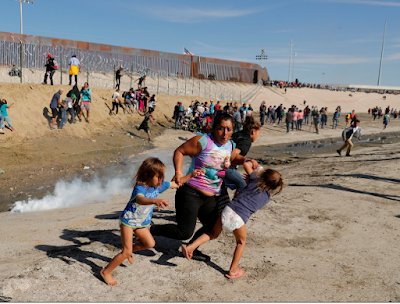 When you fell asleep, the castle on the hill was firing their customary rockets down onto the villages in celebration of the king; when you woke, your village was already in flames.
There was no time to save anything, except your only child.
__
There hadn’t been much food in the village. The castle atop the hill gathered most of the food for itself. Your uncle had found his way into the castle atop the hill; he wrote of the mountains of food to be found there.
“I’m hungry,” said your only child.
You began to climb.
__
You brought your child along. Your only child: hungry.
The castle guards had been given telescopes, and saw you coming from a distance. They raised the alarm.
The people in the castle shook with outrage. We’re being invaded, they fretted. We’re being invaded for our food.
__
The king ordered the drawbridge raised. He put archers on the parapets. “DON’T CLIMB” he bellowed.
You were still at the bottom of the hill, in the next village up.
“I’m thirsty,” your child said.
The castle puts our water in bottles, the villagers said.
You climbed.
__
DON’T CLIMB the king bellowed.
You barely heard. You thought of mountains of food. You thought of rooms full of water.
You climbed. You brought your child with you, your only child: hungry, thirsty.
An invasion is coming, the people in the castle moaned, a great invasion.
__
When you reached a higher village, you saw the easy paths had been barricaded. Only the harder paths remained.
“I’m sick,” your only child said.
The castle has the best medicine, the villagers said.
You took the harder path. You brought your only child: hungry, thirsty, sick
__
ITS AN INVASION, bellowed the king.
It's an invasion, the people mourned, from their baths in the castle atop the hill. They worried as they gathered their excess food in sacks for disposal.
A great invasion for our food and water and medicine, which is the greatest.
__
When you reached the castle wall, well-fed guards seized you.
They seized your child, sick, hungry, thirsty.
Whose child is this, asked the guards.
Mine, you replied.
Where is your proof, asked the guards.
It burned, you said. It burned, it all burned.
__
They took your child away, hungry, thirsty, sick
When you saw her next, she had died
She had died in a cage: unfed, thirsty, sick
__
The people in the castle heard of this
Yes it's a tragedy, they said. A tragedy, that this woman chose to bring her child on the journey to the top of the hill
Such a dangerous trip
Why would she put her child in such danger
Just to invade us
Just to invade
How selfish
__
Why didn’t she stay in her own village
Why didn’t she take the easier path
Why did she come when she knew the path was hard
You tried to tell them why, but they couldn't hear a word
They were firing their customary rockets into the villages to celebrate the king
Posted by A.R. Moxon at 5:23 AM 6 comments:

Down By The River

The woman had come forward, and it was all most untoward and disturbing.

Something had to be done.

The men, being men of action, did something.


“Oh well,” they sighed, tying heavy weights to her legs. “Time to carry her down to the river and see if she’s telling the truth. It would have been easier if she’d come to us right away, when the water was warmer. Such a shame, such a shame.”
.
“I’ll tell you my theory,” the eldest one said. “I believe she made a clay statue to look just like him, then bewitched it into life.”
“A sensible explanation,” the rest murmured. “If only she hadn’t, it would never have attacked her.”
“Women must be careful,” the eldest said.

“Take off the weights before you threw me in the river,” she said. “If you don’t, I won’t be able to swim.”
The man looked grave and stern. “Why these demands before swimming?” they asked. “Wouldn’t a truthful woman be *eager* to swim?”
.
“This isn’t fair,” yelled the onlookers. “It isn’t right!”
“To be sure, to be sure,” the men replied. “But you must admit, we are doing it.”

"How dare you," screamed the accused man. "How dare you say such things about me."
"You've been through so much," murmured the other men. "So much."
"But is it true?" asked a woman.
"How dangerous," the men warned, "If we asked that, we'd have to ask all the other men that, too."

The woman struggled for a while as she sank.
"Did sinking mean she was lying or that she was telling the truth?" asked a young man.
"Who cares?" said the eldest.
They all laughed. They laughed and laughed.
Some women were there, watching from a distance.