So, the street in front of my house is a part of a system of streets—a natural human system, a delivery system for the natural values provided by human community.

Every system has observable qualities. If one is curious about a system, I think it’s useful to observe and catalogue that system’s qualities.

So I think I’ll do that.

Remember, this system in which I take part is natural. If you trace it back far enough, it’s established on natural resources and values that nobody bought, nobody sold, nobody made. Wide river or vast reservoir or shoreline, rich topsoil, natural minerals, teeming forest, you name it. And so a natural system of humans sprang up, which believed it would need a human where my house is, and I became that human. I give my house value and meaning, and also my street. And I give my neighbor’s house value and meaning, and they similarly enrich mine. There is a community, and I share in it. And that community has a collective will, and I share in that, too.

Your street is there now. Maybe you can look up from your screen and see it, maybe not, but it’s there, ready to offer its gifts of transportation and interconnectivity from your house to the very borders of your country, and beyond.

Do this: close your eyes and picture your street.

Now: picture the potential for transportation it provides. What does that potential look like? I mean the physical thing. Does it have physical form? Is the form you chose a metaphor?

If you’ve seen the potential for transportation that all the interconnected streets provide, let me know. I never have.

My street, too, is a delivery mechanism for the value a community provides. It does this so effortlessly that, in the manner of water to fish, or sky to birds, it’s practically undetectable for me and all those who receive it. Until I started writing this, I rarely thought about my street. You could almost say I didn’t see it. I have never seen the potential for transportation it provides.

It’s the context from which everything else springs. Any trip I take, no matter how far I go, begins with my street, and only continues as it does because of the existence of other streets. If the streets weren’t there, I’d be far less likely to get there, or to even know they exist. I may go to many different places, but to a very real extent what places I go, and how I get to those places, is determined by the placement of streets. So this is another way that streets resemble the whole of a natural human system, which provides all the context for all my potential action. Almost every possibility available to me, no matter how smart I am, no matter how innovative, no matter how successful, none of it would be possible if there weren’t a community to share in it. I may know more than anyone else, but who taught me?  I may provide many jobs, but who provided the labor to fill those jobs? My innovations may provide incredible value, but who is there to appreciate it, and remunerate me for my contributions? No matter how skillful, or intelligent, or hard-working, or diligent, or innovative I am, this value we all share is why I’m able to apply those skills to anything more than my own cabin alone in a wilderness.

And: imagine my neighbors weren’t there. Imagine mine was the only occupied house on the block. My residence on an otherwise deserted street would start to seem like a bizarre curiosity, or at least the emptiness of all the other houses would seem to me an ominous sign.

This leads me to an odd conclusion: my neighbors lend more value and meaning to my house than I do, even though they don’t live in it. And even as we lend our street meaning, all the other people in the city lend more meaning to us and our street than we lend to them, even though none of them live on our street. And this favorable unbalance exists in the relationship between each of those other people and their own streets, and all the other streets—including mine—that are not theirs. And, in fact, the more I’m able to grow from this foundational soil of shared value, the more I owe to it. The more success I’m able to create for myself, I’m able to create only because this foundation exists, which generates more potential and opportunity for an individual than that individual would ever be able to generate for themselves. The more people, the more opportunity, potential, resource. A city of a million can do more than a city of a hundred. Isn’t that odd? The more there are to share, the more the system generates to be shared.

This shared, invisible, foundational value I derive from my street—it’s generative.

There is no procedure set for this value, this meaning. There’s no account into which this value and meaning will be deposited, no wait time for the receipt.

We can’t not get this value. They can’t not give it. How could you live in a city and not live around its streets, or benefit from their existence?

And the people who live in the city don’t live there in order to give our street value. It’s not done through any intentional act on their part. As long as we live here instead of somewhere else, the streets will go on delivering us the value of living here. And if we go somewhere else, then the streets there will deliver similar value in the same way. We seem to have a shared life in some mysterious way, which finds its center-point simply by existing here, instead of there. The value and meaning we give to each other is connected in way that is inextricable.

This shared, invisible, foundational, generative value I derive from my street—it’s automatic and inextricable.

Remember, this natural system in which I take part is human. It involves humans. Humans have taken something that naturally occurs, and they built something around it. In so doing, they’ve taken what was natural and made it something else.

My street was built sometime in the 70s or the 80s. I know, because my house was built in 1990, and because I happened upon a map of my city drawn up from the late 60s and my street wasn’t on it, though some surrounding streets were.

It’s new, my street. When the construction crew showed up, they put a street where no street had previously been.

However, my city was founded around 1840 or so, long before construction crews knew how to pave for cars; long before cars, in fact. Many streets in my city—the very streets that lend my street more value than my street lends them back—have been there for quite a while, and were, at some point, modernized.

And: Streets need to change over time, to be improved. Sometimes a new street must appear to meet a new opportunity, or that opportunity will never be realized. Existing streets require maintenance or they lose value. And—since streets give a city value, and the city returns a small portion of that value to the streets, which makes the streets more valuable, which allows the city to receive more value—a city that chooses not to maintain and improve its streets makes a foolish choice, to slowly become less and less able to produce and deliver value in a changing world.

My city was wiser than that. My city maintained and improved its streets, and so became a modern city.

The shared, foundational, generative, automatic, inextricable value that comes to me from all my city’s streets, delivered all the way down to my street … it can be changed, enhanced. It’s configurable.

My city decided to modernize its streets—a reflection of their already-existing value, an investment in the continuance of that value. A belief that there would be, in the future, people to use those streets, to enjoy that value, and to naturally provide value through their presence.

And so, any number of people did the dance that people do, when they temporarily manifest the collective will of a group. Representatives chosen, decisions made. Then the city planner, then the foreman and workers, then the residents and shops.

My street wouldn’t ever have been built, if the older streets, modernized and improved, hadn’t been there to suggest the possibility of my street.

The people who put those oldest streets there didn’t do it for me. Yet I am here.

There was no intentional act at the time to enrich me specifically. Yet I am enriched.

In some way, without intending to, I’ve inherited the value of those streets, laid down 150 years ago. And there’s literally nothing I can do to divest myself of that inheritance. It comes to me as naturally as the rain that falls on the roof—my roof. Is it my rain? I suppose you could look at it that way.

The configurations made to this natural human system of streets affect me based on where I live, not on what I think the streets should do. They provide their value based on how those who configured them, acting as part of our shared will, decided they should affect the me they thought would live there, the me that I became. If the city decides that my street should receive only the best, I will receive only the best. And, if the city decides that my street is worthless and deserves nothing at all, I will receive nothing. How I personally feel or what I believe about these configurations to this natural human system doesn’t enter into it at all—my neighbors and I will all share in this configured inheritance in the same way we share in everything else in our natural human system, that is: foundationally, generatively, automatically, inextricably.

So this inheritance has nothing to do with intention. I receive it even if it accrued years, decades, centuries before I was born. Nor is the value I gather from that inheritance something I can separate from myself. I receive it so effortlessly, it would be possible for me to receive it without even being aware of it, as a tree received nutrients from its roots without a thought to fungi connecting it to its forest, the way its leaves receive rain without a thought to anything like a cloud.

To recap: My street is part of a natural human system in which I partake, established by a will in which I partake, to deliver value that is shared, invisible, foundational, generative, automatic, inextricable, configurable, and inherited, delivered to me not because of anything I did; delivered all because there was a need for a me, and I have become that me.

And I wonder: what else might I have inherited through this configuration?

What I like about the street metaphor is, it's not a metaphor. 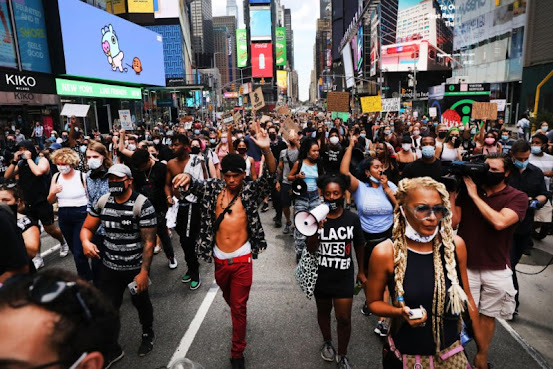