The Kingdom of the United States is like a brother and sister named Thomas and Mary, who moved next door to one another, along with their spouses, Sally and Abe. 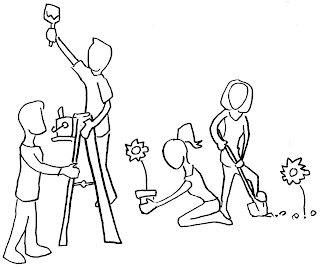 As children, Thomas and Mary had always been close, and the two couples quickly became best of friends. Double dates every Friday, joint vacations, backyard barbecue. Support for each other in times of crisis. Assisting on one another’s home improvement projects. Loans in times of financial distress. Thomas even hired Abe to work in his company, and Abe proved apt; he quickly became Thomas’s general manager.

Thomas and Sally and Abe and Mary, best of friends for years.

Late one night, a knock came at Abe and Mary’s door; it was Sally, beaten badly, arm broken, eye swollen shut. Thomas had done this to her, she said. It wasn’t the first time; it had been going on for years. But tonight, for the first time in years, Thomas had pushed it further, had hit and not stopped hitting. Tonight she feared for her life. She came to the one place she could think to go. She came to her friends. She came to her brother and sister. 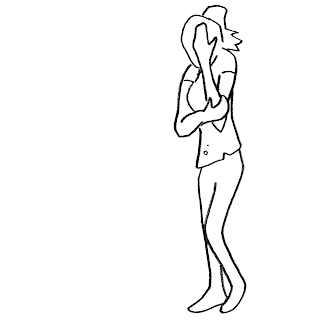 That night, at the hospital, Abe and Mary talked, and discovered many things now cast in a new light: Sally’s famous clumsiness seemed less accidental now, her tendency to over-drink seemed compensatory, and certain of Thomas’s running jokes about Sally’s shortcomings revealed themselves as cruel and controlling. Thomas’s habit of playing loud music at odd hours now seemed calculated to mask other sounds. Mary remembered troubling rumors she'd heard, and soon discounted, of Thomas's behavior with Mary and other partners when he was in college out of state. Both realized a new menace now tinted actions and words that had previously seemed harmless. 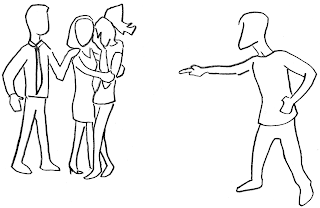 In time, the police arrived, and, just after them, came Thomas, who explained that Sally had just been having an episode. It happened sometimes. He never mentioned it because he didn’t want to embarrass her, but last night she'd gone too far. She’d gotten drunk and angry, he claimed. She’d started screaming at him (look, she’s screaming now). Then, out of the blue, on purpose, she threw herself down a flight of stairs.

Thomas was deeply disturbed by their reaction to him. He was shocked, offended; they’d gotten him all wrong. She was doing this to get back at him for imagined offenses. And he was a good person; they knew him, so they knew he was a good person. All the times he’d helped them—employed them. How could they believe it of him? And, they had to admit … Sally was a a drinker, no? A bit of a lush? And by the way, how was this anybody else’s business? He was very calm and very logical.

The police asked Sally if she had been drinking last night. Sally admitted she had.

The police cleared their throats. They asked Abe and Mary, do you really want to give a statement?

Abe decided not to give a statement. After all, Thomas was his friend and brother and boss. And, he reasoned, both sides have some part of every quarrel. And he knew Thomas, and knew all of his amazing qualities. It was impossible to think his friend—his brother—was an evil man. 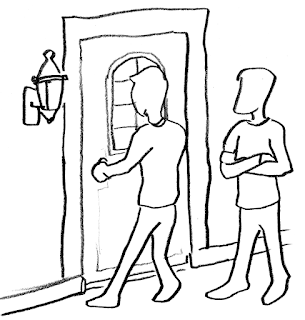 But Mary gave her report to the police, and stood with Sally as Sally gave hers, and when Abe left them both to bail out Thomas, she brought her sister into her own home and changed the locks. When Abe returned with Thomas, neither of them could get in anymore.

When Thomas demanded to be let in to see his own wife, Mary told him, I love you. But things aren’t the same anymore, now that I see what you’ve done.

When Abe demanded to be let in to his own home, Mary told him, I love you. But things aren’t the same anymore, now that I see what you’re willing to allow.

And Thomas berated his wife, growing ever angrier for alleged lies against his character, and shouted that her behavior now merited the treatment she had falsely claimed to have received. And Abe scolded his wife, for her harsh tone, her close-mindedness, her unwillingness to hear both sides. But Sally would not deny what she knew had happened. And Mary refused to open the door, no matter how hard Thomas pounded.

And both Thomas and Abe were angry and offended, and they went off to complain to each other about the uncompromising attitudes of their wives.

And Sally wept, because she was abused and vulnerable, and she mourned, because she had been beaten and disbelieved.

And she wept, because Sally was still her sister. 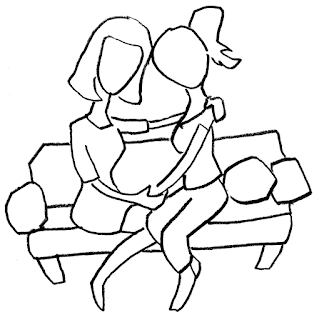